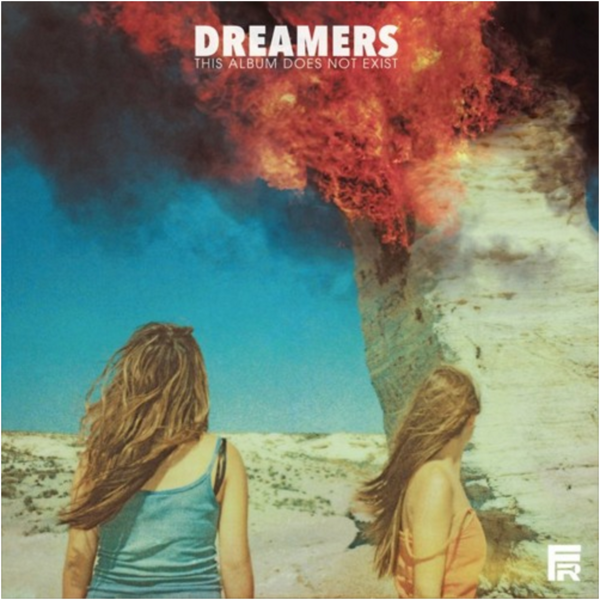 Album Review: DREAMERS – This Album Does Not Exist

I’ve been chomping at the bit for a full length LP from Brooklyn trio, DREAMERS, ever since I first discovered their pop tinged indie rock sounds back in 2014. I was lucky enough to catch the guys last year when they played Mo Pop and couldn’t help but scream with delight when they announced that they were working on their debut LP that day. Now that time has finally come and I can honestly say that it was well worth the wait.

This Album Does Not Exist is chock full of the catchy hooks that made me instantly fall in love with DREAMERS a couple of years ago. Album opener “DRUGS,” which I recognized from the band’s set at Mo Pop last year, kicks things off right. An infectious beat intermingled with some hooky guitars gets your energy up before backing down a bit for the first verse. “DRUGS” builds up nicely, slowly pulling you into This Album Does Not Exist and not letting go until the last note plays.

What DREAMERS truly excel at is mixing deeper messages into their exuberant indie rock sound. While “DRUGS” sounds like a great anthem for a summer fueled by intoxicants, it’s really about the choice many millennials seem to be making by putting getting high above all else. “We’re gonna get more, ’cause it’s cheap / ‘Cause we’re sheep looking for a rad life / Fast, want it now / Don’t wanna think for ourself / we’re just millenials” Nick Wold sings before launching into the second chorus.

Similar themes are interlaced throughout the album which is no surprise considering Wold wrote the songs after leaving a relationship and an apartment and began living in his Brooklyn practice room. The band’s first single, “Wolves (You Got Me)” deals with the pro and cons of getting sucked into someone else’s world over a guitar hook that is simply irresistible while “Shooting Shadows” deals with becoming disenchanted with love over an infectious beat and dark guitars.

While the first half of the album is great, DREAMERS  really hit their stride for the last tracks of This Album Does Not Exist. “Cry Out For Me” has verses that are dripping with 80’s inspired synths while the choruses are reminiscent of indie rock à la MGMT. “Last Night On Earth” has just enough pop sweetness added to the mix to make it the anthem to the ending of summer.

This Album Does Not Exist closes out strong with “Little New Moon” which sounds like it could have come right off of The Strokes’ Is This It. The pulsating guitars make it impossible to resist the urge to bop along to the beat while the lyrics seem full of hope for what’s to come.

DREAMERS craft an album filled with energetic tracks that are the perfect soundtrack for the last few weeks of summer. It’s easy to forget that DREAMERS are tackling some heavy themes with their lyrics when you can’t resist the urge to just dance along and forget everything else.

There’s still time to pre-order the album before it releases on August 26th through Fairfax Recordings via Amazon, Google, or iTunes